The Mission of Humanities Universities in Eastern and Central Europe: Between Training and Bildung June 6, 2012 – June 7, 2012 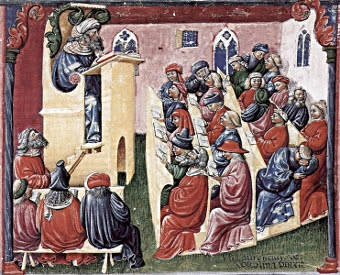 The Mission of Humanities Universities in Eastern and Central Europe: Between Training and Bildung June 6, 2012 – June 7, 2012, Vilnius, Lithuania. This international conference will be EHU’s highest profile event in 2012 and dedicated to the commemoration of the 20th anniversary of the founding of EHU.
Concept
We live in societies described by social theorists as functional, where the division of labor puts every person in a precise professional place determined by concrete social needs and goals. In such circumstances the university becomes a mediating structure that trains individuals for these professional spheres, supporting the functional principle and acting according to its logic. But how do universities in Central and Eastern Europe construct and pursue their broader mission in the context of functional societies? Should they pursue only the goal of training professionals, or also embody the integrative mission of cultivating the individual in all respects, as exemplified by the German concept of Bildung in Humboldt’s model of a university?
Holism and integration have been enduring educational goals. From the ancient idea of paideia through the Middle Age model of liberal arts schools, the concordia of the Renaissance to the modern conception of integrative learning, the cultivation of a “good and perfect human” has been and remains the mission of much of higher education, even if the characterization of the end goal of education has changed in public discourse. “To be a good citizen,” “to make the spiritual journey to God,” “to train as a journalist, doctor, teacher” are all goals of contemporary education, and all illustrate the diversity in values and missions of educational institutions, as well as society’s changing attitudes toward its individual members and itself as a community. These changes demonstrate a shift from a holistic, integral vision of humanity to training for particular skills considered important in a functionally differentiated society.
This tendency raises important questions. What happens to those centuries-old spheres of human development such as citizenship, union with the transcendent, and progress toward harmony?  Do these changes speak to the fragmentation of our educational models, the disengagement of students, and a reduction of civic activity and public service? What functions can and should universities carry out in Eastern and Central European societies today?  How do universities promote their social science and humanities functions while fulfilling their integral mission in human life and society in this region?  These are the central questions of this conference.
Posté par pcassuto à 19:39 - LSH - Permalien [#]

The social contract between universities and society

The Council of Rectors of Portuguese Universities (CRUP), together with EUA, recently organised a one-day event for Portuguese higher education stakeholders entitled "University Autonomy in Europe: the autonomy scorecard and the case of Portugal". The meeting, attended by over 100 participants and with strong media presence, followed up on the publication of last year’s EUA Autonomy Scorecard report which compares university autonomy across 26 European countries. The event combined presentations on current international trends and the Portuguese perspective.
In addition to an in-depth analysis of the state of institutional autonomy in Europe, the report includes scorecards which rank and rate higher education systems in four autonomy areas: organisational, financial, staffing and academic autonomy. Last week's event at the Calouste Gulbenkian Foundation in Lisbon was an opportunity for different stakeholders in Portugal (including universities and policy makers) to discuss the report’s findings with European experts in the context of the Portuguese higher education system.
Introductions by EUA President, Professor Helena Nazaré and the President of the CRUP, Professor António Rendas, were followed by a detailed presentation of the Scorecard project by report author Thomas Estermann. Individual sessions then looked in more detail at each of the four elements of university autonomy outlined in the report and in which European experts (including former EUA President Professor Jean-Marc Rapp, and Sir Howard Newby, Vice-Chancellor, University of Liverpool and Chair of the Autonomy Scorecard Steering Committee) presented alongside Portuguese experts. The event showed how the Scorecard findings can be useful in informing national debates and reforms on university autonomy. EUA intends to continue to monitor progress in this area with its members.
Find out more about the event here. To find out more about the Scorecard project visit the online autonomy tool developed by EUA.
Posté par pcassuto à 19:18 - Autonomie - Permalien [#]

Online higher education for the masses

By Stephen Carson and Jan Philipp Schmidt. The term ‘massive open online course’, or MOOC (coined by Dave Cormier and Bryan Alexander) describes courses that take place online; are open in the sense that participation is typically free of charge and learning materials can be modified, reused and distributed to others; and reach massive communities – of tens of thousands – of learners.
MOOCs are a relatively new phenomenon, but they recently captured public attention when Stanford University launched a set of free online courses.
Sebastian Thrun, one of the MOOC pioneers at Stanford, created the artificial intelligence course that attracted more than 160,000 users (though only 25,000 finished the course). Inspired by this success he founded Udacity, a for-profit start-up that will use a similar model for online instruction, with the goal of making an entire computer science course available at no cost.
Thrun’s Stanford colleagues Daphne Koller and Andrew Ng also participated in the first round of Stanford MOOCs and subsequently spun off Coursera, another for-profit start-up, which aims to provide a platform for other universities to host similar online courses. A quick review of the key characteristics these MOOCs share will help us better understand what opportunities they offer to universities and professors.

Faculty Are From Mars, Study-Abroad Officers Are From Venus

The following is a guest post from Mandy Reinig, director of international education at St. Mary’s College of Maryland. Studying abroad has become an increasingly important role within American higher education. The administrators who run study-abroad offices and faculty members hold a key responsibility in this process. However, there is often a divide in the understanding of the functions they play in the process of turning students into global citizens. This tension can be particularly pronounced between education-abroad professionals and professors since it crosses that ever-contentious faculty/staff divide.

By Justin Norrie. Postgraduate students in humanities, arts and social sciences are older, feel less supported and have fewer spaces to work than their counterparts in sciences, technology, engineering and mathematics, according to a survey of more than 1,000 students completing research degrees.
Students in all disciplines said the quality of the supervision they received was the most important factor when considering whether to stay on or drop out. Some complained they did not have enough funding to attend conferences or perform field work, while others said they did not have their own desk or lab space, according to the survey, developed by the Council of Australian Postgraduate Associations (CAPA) with the Department of Education.
The President of CAPA, Chamonix Terblanche, will present the findings at the Higher Education Summit in Melbourne today. She said supervision was “easily the biggest concern for students, and the most important factor when it comes to those who drop out.
“Collegiality too. As soon as research candidates feel they’re being treated with respect, and their opinion counts, and they’re being included in all these collegiate activities, then it’s a far better experience for them. Their supervisor is crucial to that.”
The survey found that humanities, arts and social science (HASS) students made up just 25% of postgraduate students aged 24 or younger, but 85% of students over 65. While most participants said they had a positive experience of “academic inclusivity and collegiality”, 134 HASS students rated their experience as poor or below average compared with 100 students in science-based subjects. Almost twice as many HASS students did not have access to their own desk and chair: 153 to 79.
Ms Terblanche said that although the survey did not map attrition rates, “we do know anecdotally that for students in the humanities, arts and social sciences, attrition rates are higher than for people in the science, technology, engineering and mathematics. The latter tend to work together on industry-based projects or in labs, so they have more support around them naturally. But with the humanities and others, they tend to work more on their own, so they’re isolated and don’t always have someone to reach out to.”
The average age of a PhD student was 35, she said. Many had worked for several years and expected to be treated as equals rather than “rookies” when they returned to their studies.
“Resources are a big issue. So are the tools that students are furnished with. Do they have their own desk and computer? How much money are they allowed to spend on doing field work? Do they have support for attending conferences?”
The report said that “so-called ‘imposter syndrome’, that is, the feeling that one does not deserve what one has accomplished, such as a place in a higher degree by research, seems to be fairly common amongst [higher degree by research] (HDR) candidates, and may be why many believe that they are simply not ‘smart enough’ when supervision proves difficult.
“The stakes can be a lot higher when there is limited expertise in the department, such as when disciplinary knowledge is restricted to an HDR candidate’s supervisor. When things go wrong in such environments, there can be nowhere to turn.”
Posté par pcassuto à 12:08 - LSH - Permalien [#]